It used to be a furniture shop, then it was turned into a bar night club, 5th Avenue (?) and then the brilliant, but unsuccessful food market, Ambrosia. The latter was a shame — the idea was good but the implementation wasn’t, and so it closed. Now, however, it has been given a new lease of life and a considerable investment by the new owners. They have completely gutted the interior in fact the only thing left is the toilets. The elegant interior done out in a mainly blue tone is inviting and there is plenty of space between tables. 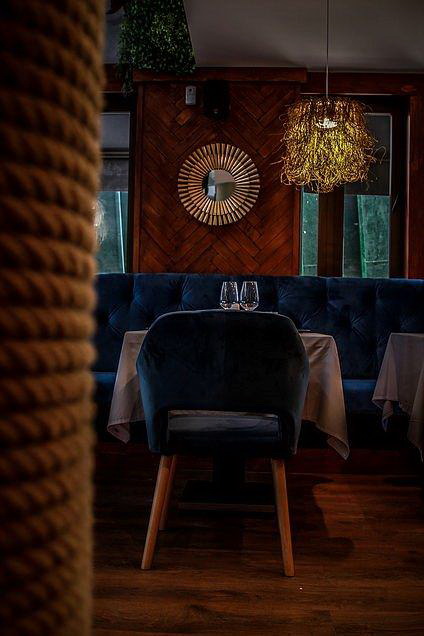 It’s a strange sort of place as it seems to want to be all things to all people. It’s open for Breakfast, Tapas, Midday snacks, Menu del Día for only 9€ and Lunch and Dinner; As well as cocktails and special music events. The menu too is very mixed. They call it a Mediterranean Fusion, but it just seems to be a mish-mash of dishes. Having said that, most of it is hard core Spanish although they must be aiming for an English speaking audience as there is English translations on most of the dishes and quirky titles of the dish (only in English) which is strange.
The Tapa selection is inexpensive at about 3€ a pop but the a la carte gets serious. A typical Gambas Pil-Pil or ‘Spanish’ Russian Salad (16€ and 12€ respectively) sit alongside an adventurous salad of Quinoa, Mango, Prawns and Avocado and a Chicken Tandoori! with Fennel and Grilled Peach (both 16€). Soups range from a Cold Mango Soup to a Goulash passing a Thai Prawn Soup — which is delicious at 14€ — on the way.
Main courses are equally mixed with some strange names obviously aimed at humour.
GO WELL – GO SHELL, Grilled scallops with parsnip purée and Thai sauce with coconut milk, then a similar treatment to the Iberian cheeks of pork with Thai red curry, jazmíne rice aromatised with cardamom and citrus. In amongst the main courses you bump into a ‘Moules Mainière’ (which of course is a Spanish interpretation which bears no resemblance to the French classic as they are cooked with tomato and white wine, flavoured with paprika) and a Ceviche of Corvina (similar to Sea bass) served with sweet potato, chilli pepper, lime, red onion coriander and crispy sweet potato. The strangely named ‘MARGARET DE POTATO’ — a breast of duck with orange and rosemary — was more basic, pink and tender. Even the wonderful Chuleton of Beef (beware at 62€ a kilo, to know what you are ordering!) comes with mustard, wasabi, ginger, soya reduction sauce, garlic mayo, fresh coriander and crispy potatoes — That is Fusion!
Desserts are limited but very artistic. The wine list has some interesting wines some of which are very reasonable priced and by the glass, the Verdejo and Marques de Riscal Rosado are at 2.80€ a glass.
Service is welcoming and friendly. At night it needs lots of people to create an atmosphere but if standards are kept and the food tweaked I’m sure it will be a great success. I hope it is for the investment made. I did hear that they were changing the upper area into a recreational area of some sort — but don’t quote me. I hope that doesn’t mean cold feet.
You will find the Posidonia in the same area near to Iceland by Puerto Banus. Ctra.Nac.340, km175 Edif.Rimesa, local 2. Marbella
Tel: +34 722 33 26 69